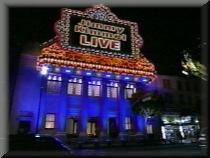 Jimmy Kimmel Live airs weeknights at 12:05am on ABC, immediately after Nightlight.  That'll give you time to watch Letterman up until the top ten list before flipping over to ABC.

The show premiered after the Super Bowl (following Alias and local news) on January 26, 2003.

I posted a lot of stuff for the first three weeks of the show, because I was really excited about the show.  Also, in future years I thought the old stuff would be cool to look at. The more current stuff resides in the "JK Live Photo Buffet", until I can find a better way to organize these links.